Our family has now traveled to a range of foreign cities together. I am grateful and have enjoyed the travelling, spending extra time with all of the kids and we seem to have maintained our sanity.

Typically when we get to our destination, if within walking distance, Jem walks upfront with one suitcase and navigates us to our location with perfect precision. Taking the second suitcase I’ll walk at the back to ensure we actually have all three kids. The in the middle taking turns with the third suitcase and they all had their moments with that suitcase.

I won’t name names, but to give you an idea of the moments…In Positano, we had to walk up a small hill and Jem and the other two kids were getting ahead of us, so I asked our lucky child wheeling the suitcase to catch up… And suddenly they yelled “I can’t because it’s hot and Italy stinks and I am not doing it!”. They then walked off leaving the suitcase to roll in my direction.

The funny thing about that moment was there was lovely looking English lady perhaps in her late 50’s sipping tea at a cafe situated close to us. She caught most of the loud rant, spat her tea out, nearly choked and then chuckled. All I could do was shrug, smile and walk with both suitcases until I caught up.

Another time one of the kids fell over the top of their suitcase when crossing a busy road in Rome, followed with yelling and an attempt the kick the suitcase, all while the man that let us cross waited patiently.

100m down the road another child did the same thing on the foot path and knocked down a shopfront sign. The suitcase got another serving. Yes, we thought about a taxi! It was an hour wait verses a 15min walk.

Rolling into Rome, I was excited that the kids had an opportunity to see so many grand structures learn about Roman history. I genuinely thought they would be in awe. However, Rome was their least favourite place in Italy, in their words Rome was boring.

The Colosseum and Roman Forum went well, which was followed up with the Gladiator movie, one of my favourite movies! The best part being when Maximus announces his name: Gladiator snippet

See my previous blog re the Colosseum: Even gladiators miss their homes. 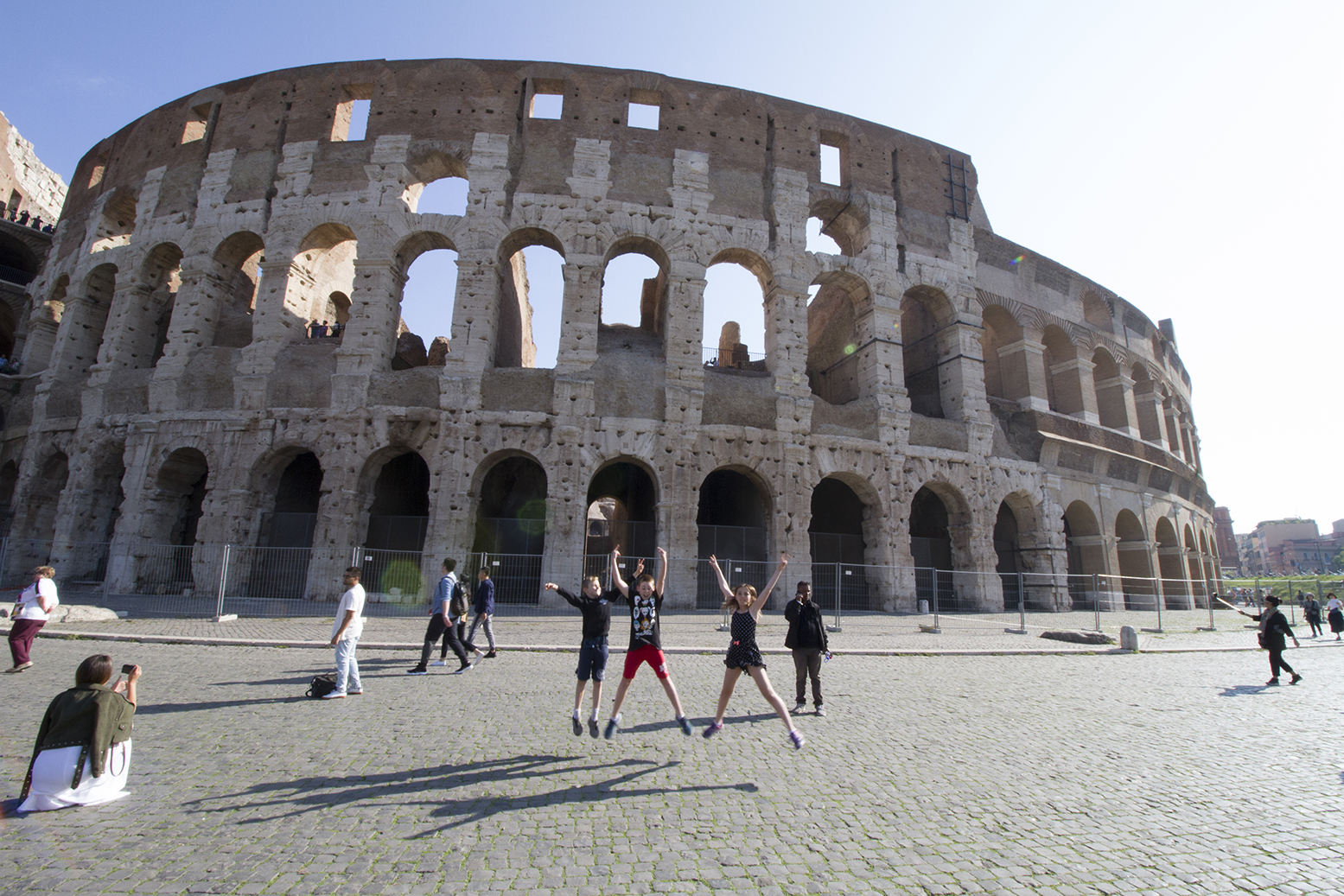 The kids outside the Colosseum.

On our second day in Rome we visited the Vatican City and the Trevi fountain. The kids loved throwing the coin over their shoulders and the concept of coming back to Rome. They also helped to celebrate a proposal by cheering with the crowd after the girl accepted.

The Trevi fountain police blew their whistle at us for trying to eat a snack on the steps. It wasn’t like we were about to throw our food over out shoulders or anything, but after thinking about it I understand. Later the kids received another whistle for climbing the wall at the side of the fountain. Not sure which statue they were trying to reach :o. 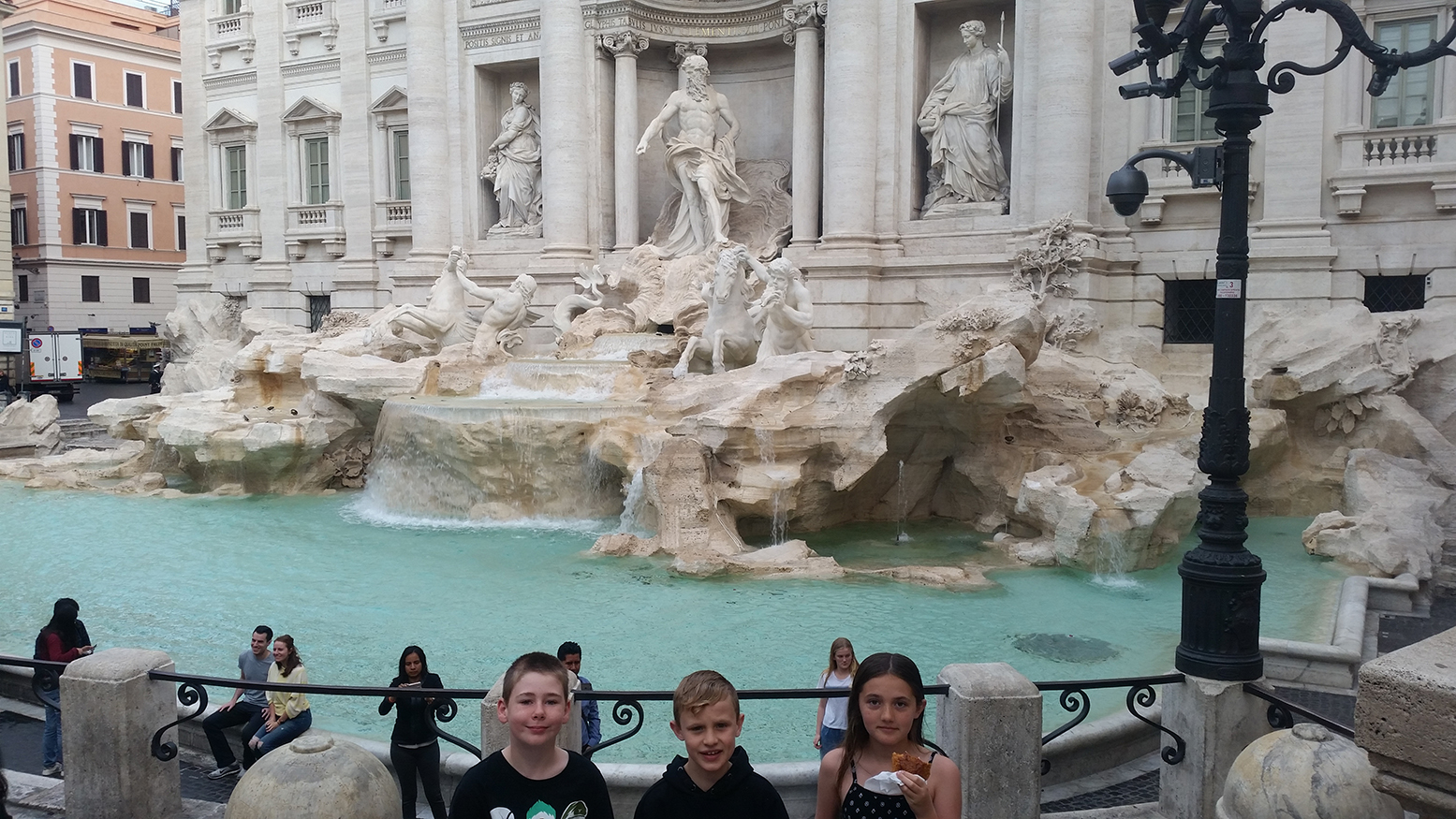 Kids eating down by the Trevi… tsk tsk

For Vatican City we tried booking tickets the day before, but they weren’t available online that close, poor planning on our part I guess. Is it much to ask that online ticketing work though??

We bought bus tickets to get to the Vatican City, but the first three buses were jam packed. I just didn’t want the kids to be sardines on the bus, particularly given the mood being exerted from the bus (see image below). 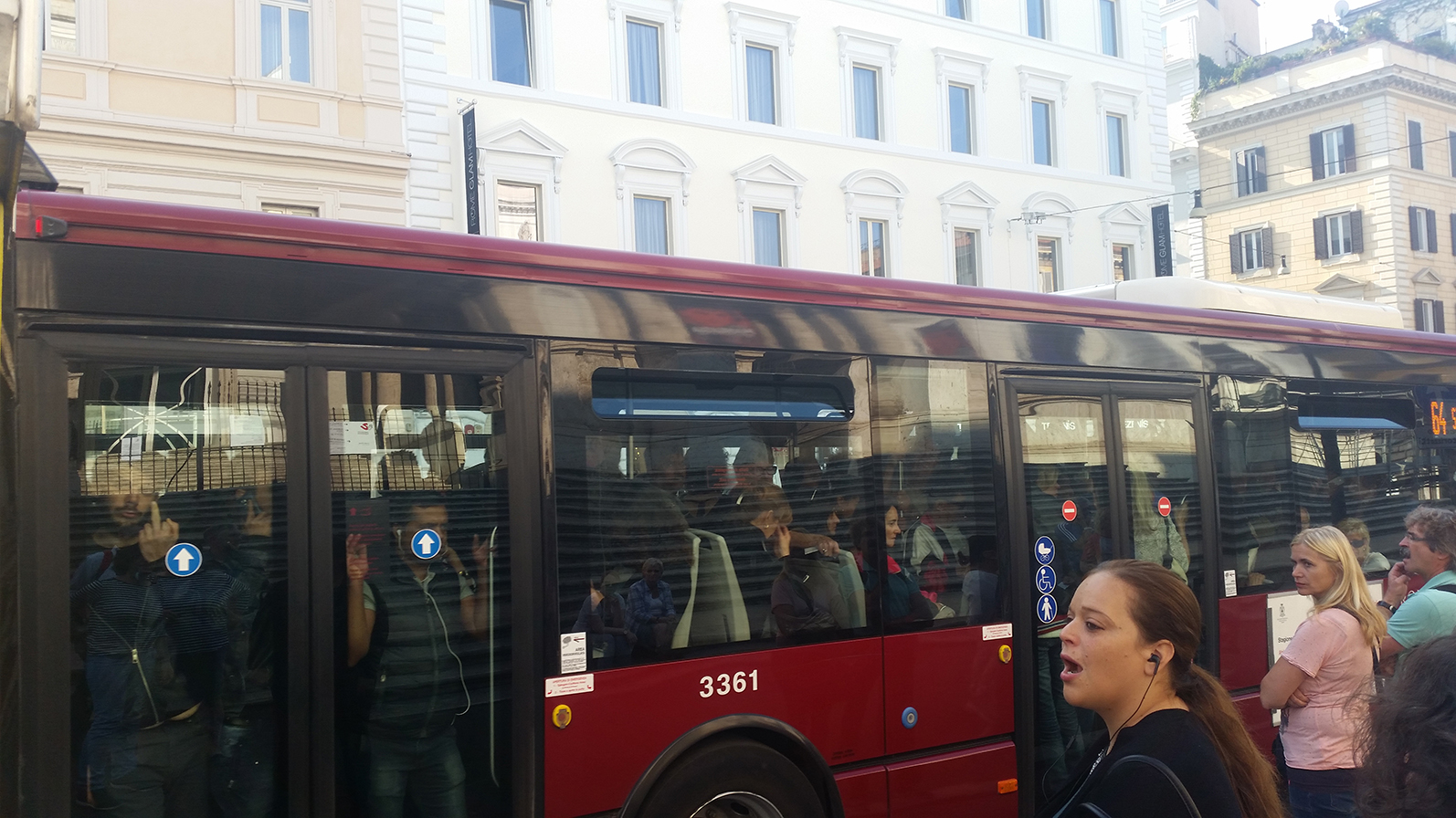 Check out how rude some of these sardines on Rome buses have become. Look close to the blue up arrows.

Long waits and three kids don’t mix, but we tried to make the most of it. Played word games, the kids played on the wall. At some point I heard one of our kids dare the other to thrust their groin in a repeated motion against the wall. Boredom does funny things to kids. I pretended not to know them. Not a gesture you see at the Vatican walls every day, but I guess we can’t all be good Catholics. 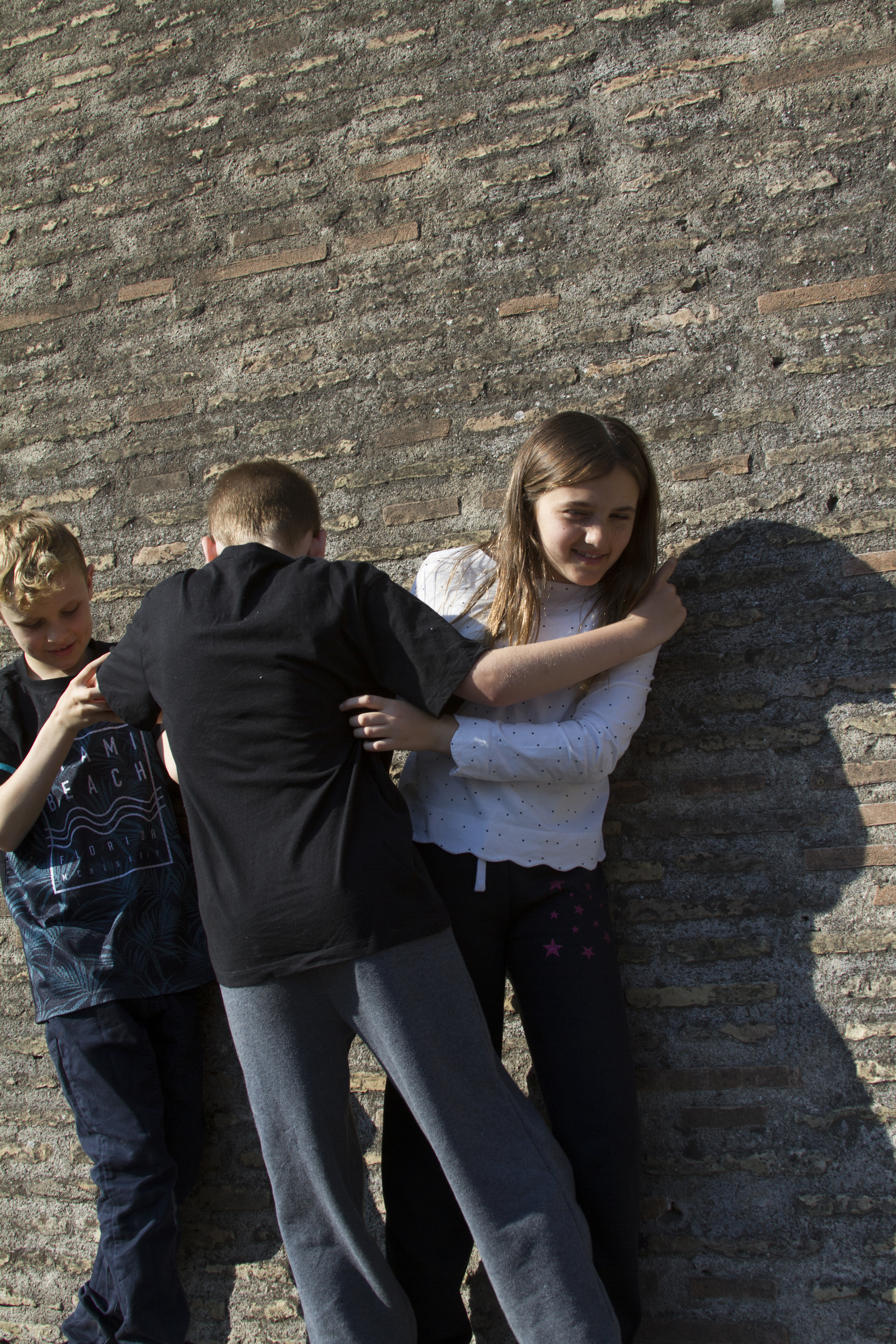 Chloe, Luke and Zeki stepping past each other on the narrow ledge on the Vatican City wall..

An hour into our wait I took the kids to get some pizza, in order to have permission to use the toilets. 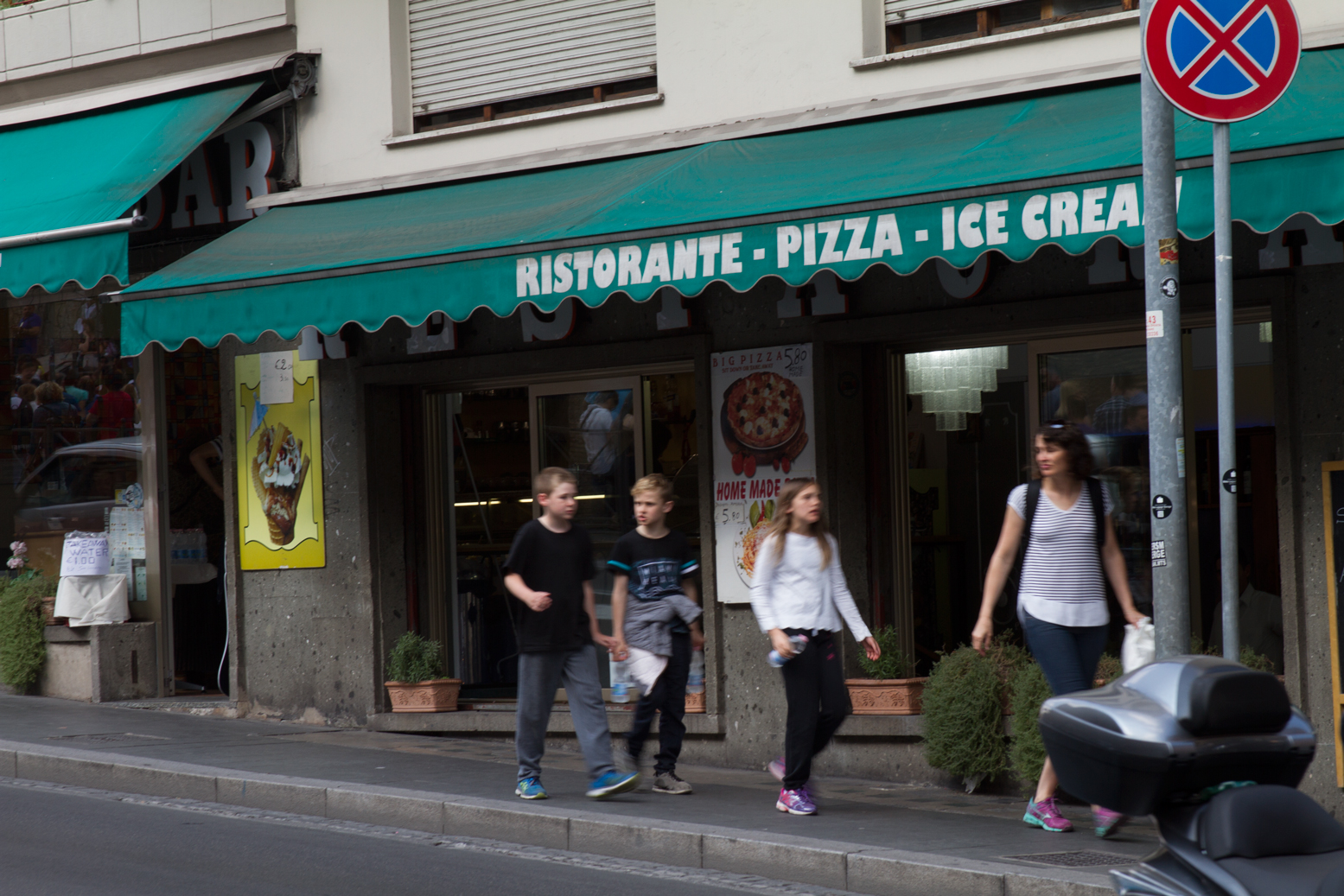 Then finally inside the walls we looked around the different museums, galleries and the Sistine Chapel. 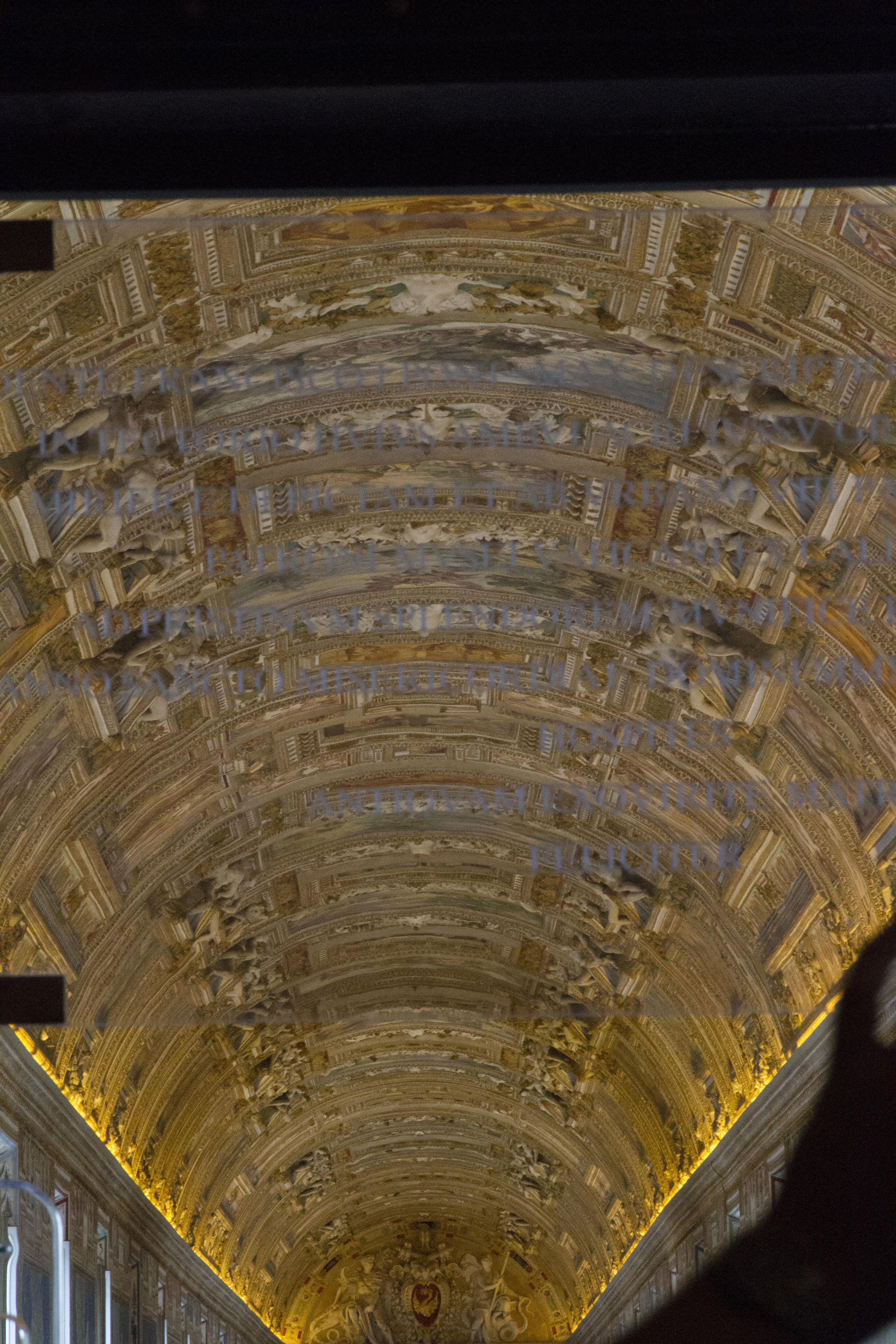 A Gallery at the Vatican, leading to the Sistine Chapel. Not sure what this is, but some strange writing has appeared on top of this photo that Jem took…

The next day we swung by the Pantheon (which was closed) and the Spanish steps. We walked to the top, the view was amazing. The kids counted the stairs going down. Neither could agree on the number. 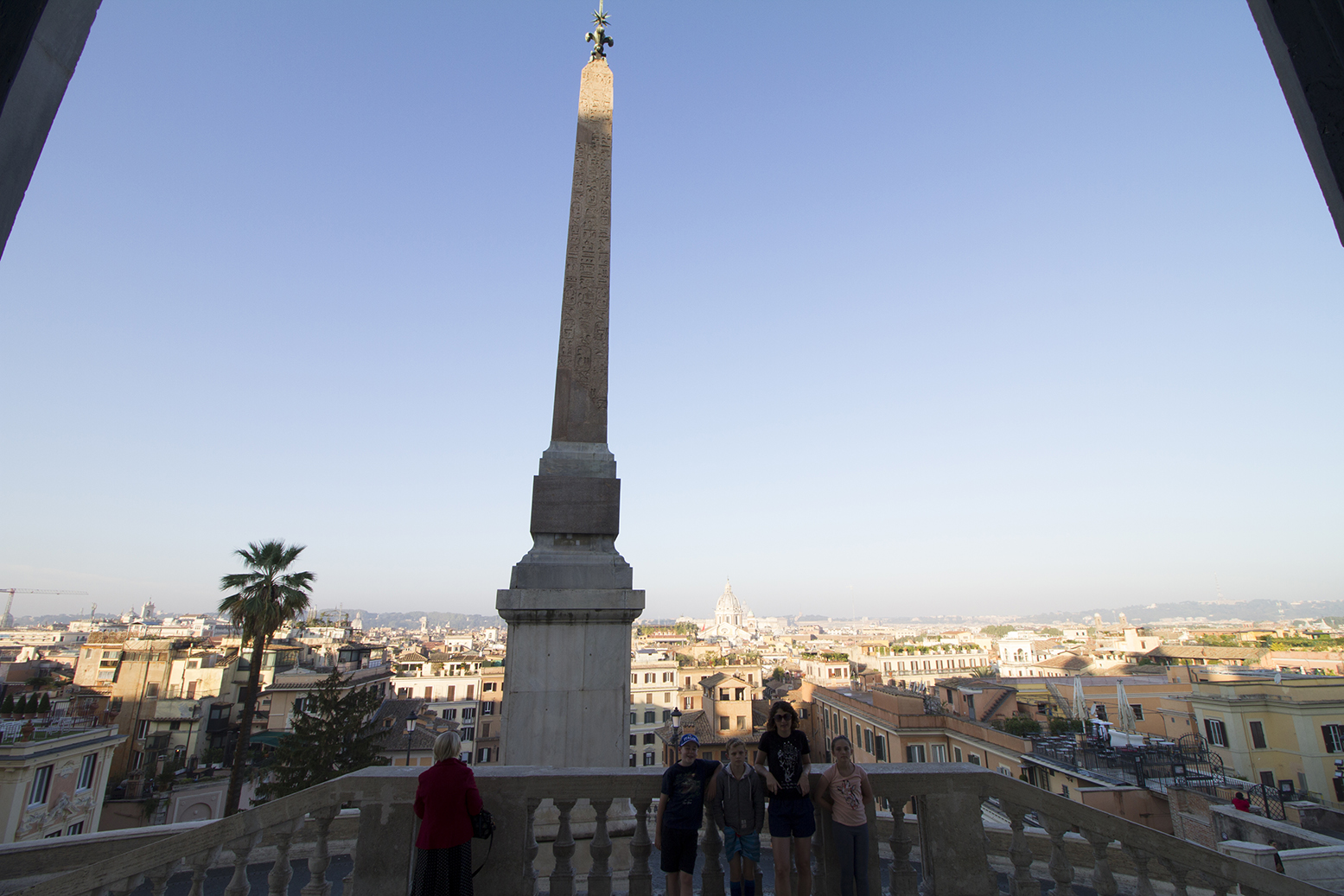 The view from the top of the Spanish steps. 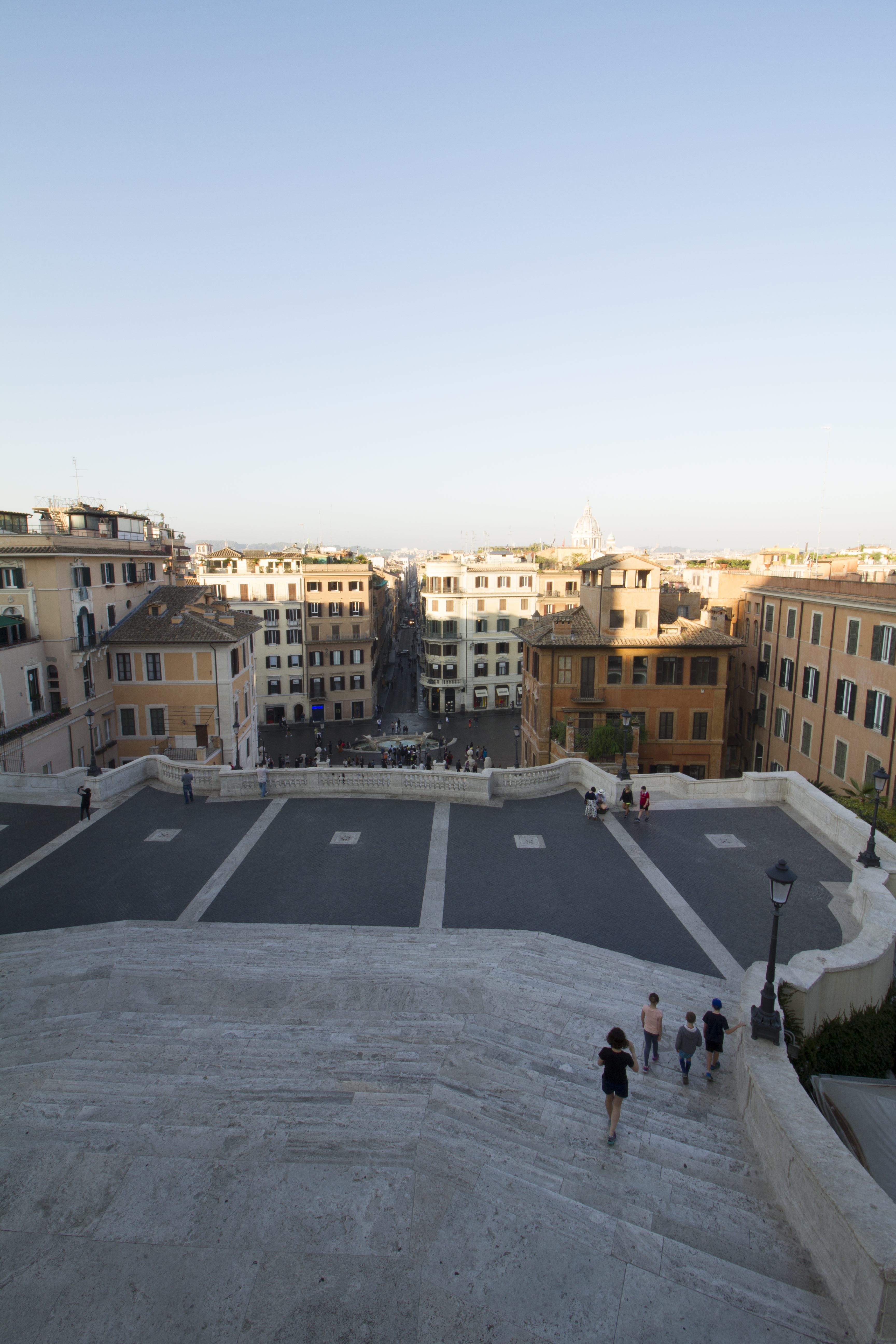 The kids and I going down the Spanish steps. 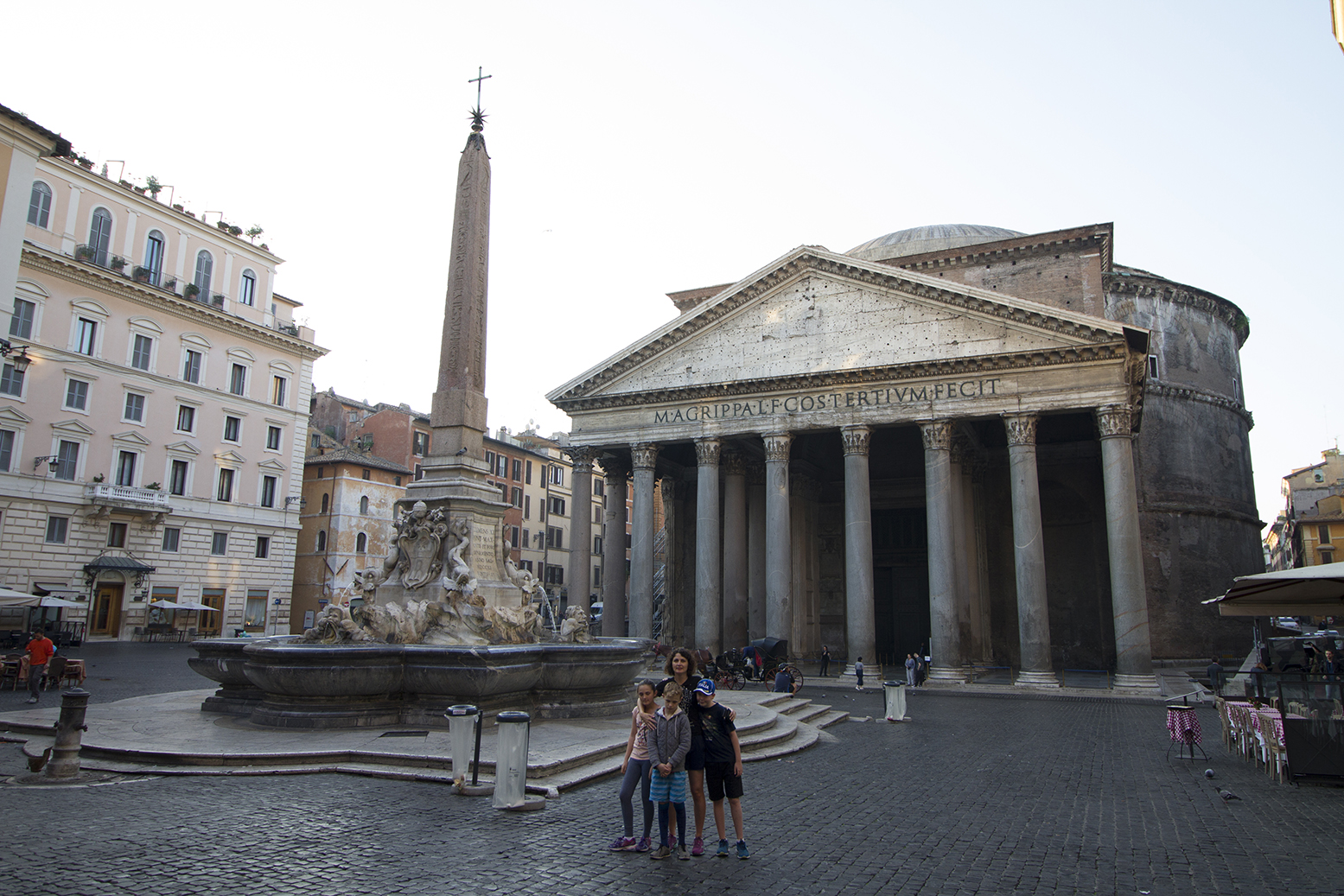 The kids and me at the Pantheon in Rome..

We checked out of the Rome apartment at 10 am and then spent 11 hours at the airport waiting for our flight to Malta. This is when we could have done with the Qantas lounge. Perfect timing for the kids to just get stuck into their homework, the kids loved it. 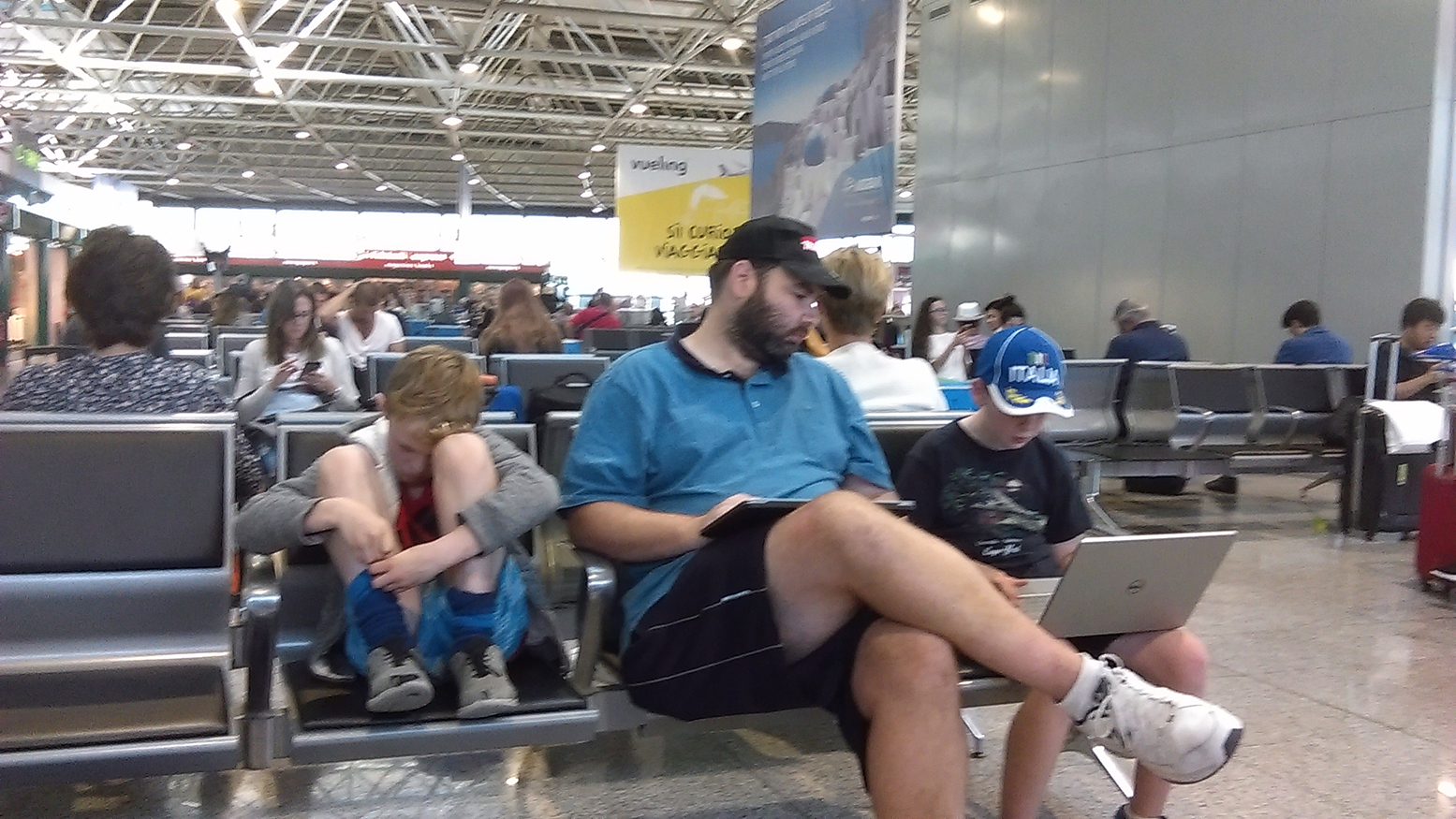 Not everyone agrees to homework willingly; and every day it’s a different person.

For such a busy airport Rome was a little outdated. We found one small charging station in the departure area. Jem took over a power board with capacity for 6 devices, keeping us connected.

We were happy to leave Rome for the next adventure and hoping the kids enjoy Malta.

One thought on “Rome was their least favourite place”